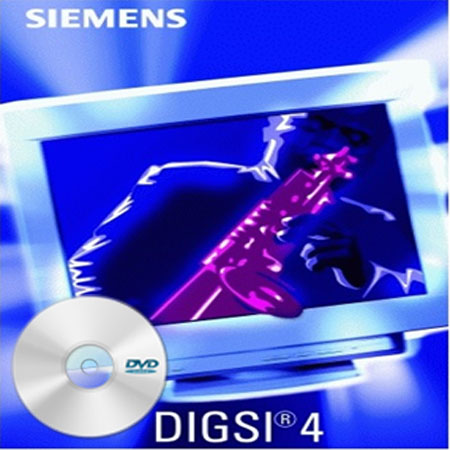 Object (setting file) VD address is reported, and can be changed in Properties 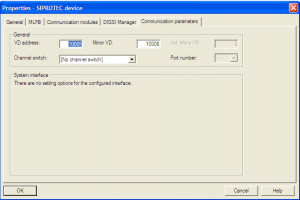 This document provides general information. You should follow your own network standard practices which may have specific procedures for handling of device and variant files and assignment of VD addresses etc to support your specific commissioning/maintenance and remote engineering regimes. This is especially important where SICAM systems or IEC 61850 Protocols are used.

Note that VD address is only ‘reported’ within setting file “Interface Setting” section. 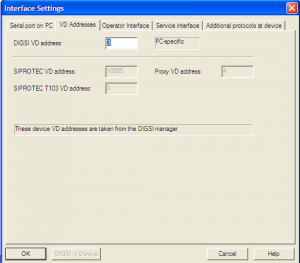 The VD address can be located and changed in the setting file via the Object Properties dialog. The VD address of the relay can be found via the LCD display using the appropriate front panel keys [Main Menu -> Settings (4) -> Setup/Extras (10) -> Device-ID (5)]

When in front of a SIPROTEC 4 relay, the assumption is that you are an authorised person (by virtue of having access to the building), and that you have identified by panel labelling that you are connecting to the correct relay. Therefore, DIGSI permits connection to the relay front interface via “Plug & Play”.

What is Plug & Play?
Plug & Play is used to connect to a SIPROTEC device without the need to have a saved setting file (nor need to know the relays VD address). Any setting file downloaded is of a SIPROTEC “variant” type.
Note that with Plug & Play, while you don’t need the original setting file, you must first have the matching parameter set installed on your PC. Parameter sets (DIGSI Device Drivers) are installed as part of the normal installation of DIGSI, during the “DIGSI Devices” installation phase, or as a subsequent download of a specific (updated) parameter set.

Plug & Play is the method recommended by HV Power for Technicians to capture copies of “as found” and “as left” setting files during any local work on a SIPROTEC 4 relay.

Other front panel connections:
Connection using a stored setting file by going “online” is also permitted (The VD address in the file is compared to that in the relay before allowing connection).

Commonly the rear Service Interface on SIPROTEC relays are RS-485 ports (in systems other than those using IEC 61850 protocols). These rear Service Interfaces are normally daisy chained, allowing one remote connection to be used to communicate to any SIPROTEC relay at the site.
To connect DIGSI via the rear service interface, you need the original setting file, as connection is only permitted when the VD address of the file matches the intended relay. Note that if there are parameter value differences, such as old/new settings, provided the VD addresses match, then connection will occur, but with the choice to use either the relay data or the PC setting data given.
Plug & Play connection is not permitted over the rear Service Interface, as if remote, there would be no visual confirm that you are connecting to the correct relay.

With DIGSI setting files a SIPROTEC “device” is an object (setting file) with a unique VD address. A “variant” is an object (setting file) that is copy of a “device” which has the same VD address as the original device.
Variants are identified in DIGSI Manager by the Var suffix in the name.
Variants are normally used where a temporary change to a setting file is required, such as creating a alternative setting (for the same relay) to be used when a line or transformer rating needs to be temporarily changed due to network maintenance etc.

CREATING DEVICES & VARIANTS:
Insert new device: When inserting a new SIPROTEC device into a project (using the Device Catalogue), a “device” is created, and DIGSI automatically assigns a VD address which is unique to the project.

Plug & Play: Files created by Plug & Play will be of the variant type.

Create Variant: This command creates a variant file of an existing device or variant.

Import: When importing an object (setting file) into DIGSI, you are given the option to import as a variant or as a device.

Importing as a variant or device.

In general, if you are supplied a setting file to undertake work on a relay, such as for a setting change:

File >Reorganise
“Reorganising” a project (to clear free DIGSI memory) may cause the VD addresses within DIGSI to be changed.

Refer to the System Manual for notes on variants with regard to SICAM control centre, IRC combinations or process bus.

THE ROLE OF INITIALISING THE RELAY

A relay must be initialised at least once to allow communication with it. Normally relays are initialised by HV Power as part of our pre-delivery checks. Initialising is the process where a complete parameter set (a setting file) is loaded to the relay. This includes a VD address, thus providing a level of security for future remote engineering connections.
Warnings:

You will need to initialise the relay in the field only once during its first commissioning in order load the designers intended setting file (with the specific intended VD address). Be aware of the above warnings and do not attempt to use Initialisation as a simple remedy for latter connection problems, without being aware of the implications.

By changing a VD address, depending upon your networks remote engineering architecture, you may impact others ability to remotely connect to the relay, if they do not have access to the new VD address, or setting file.

With DIGSI and SIPROTEC 4 relays there are actually several types of addresses including:
DIGSI4 VD address: This is the address given to the specific instance of DIGSI 4, The automatically assigned address is normally sufficient. The only time this would need to be changed is where simultaneous communication to both the front and rear service interfaces was required.
SIPROTEC-VD-addresses (VD, Mirror-VD and redundant Mirror-VD): These are the VD addresses referred to in this document, controlled by the DIGSI Manager and transmitted to the SIPROTEC device to permit communication with the DIGSI Device Editor.
The Mirror-VD address and redundant Mirror-VD address is use for connection to control centres such as SICAM PAS.
SIPROTEC-T103 VD address: This address is used by IEC 103 communications to the System Interface (SCADA interface)
SICAM-Proxy VD Address: Used by SICAM Substation Management Systems for unique identification of SIPROTEC devices
IEC Link address: For front interface connections, this is 1. For rear Service Interface connections, if a star-coupler
is used, a unique IEC Link address has to be assigned to each SIPROTEC device (1 to 254)

For more information on VD addresses and communications, refer to Section 7 of the SIPROTEC System Description Manual

The VD address should not be confused with the RS-485 addressing, which is different and additional. Where rear Service Interfaces are daisy chained RS-485 circuits, each interface must be given a unique address. Figure 4 shows the “Address” field which should be set to a unique number (1 – 254) for each relay on a multi-drop connection to allow DIGSI to address a specific device. The same unique addressing requirement exists for connection of the Service Interface to Siemens star-coupler 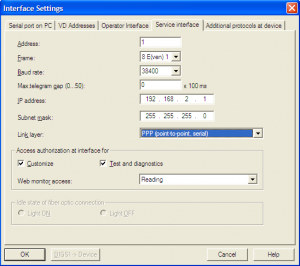 The Operator Interface Settings also has an “Address” setting similar to the Service Interface. Normally this is “1” as only one direct connection is made to this port at a time. However, it is possible to connect to multiple SIPROTEC Service Interfaces using Star-couplers and media converters, and thus this port can be given a unique address for DIGSI communications. In this case all devices will “hear” the interrogation from DIGSI, but only the device with the matching DTE address (IEC Link address) will respond.