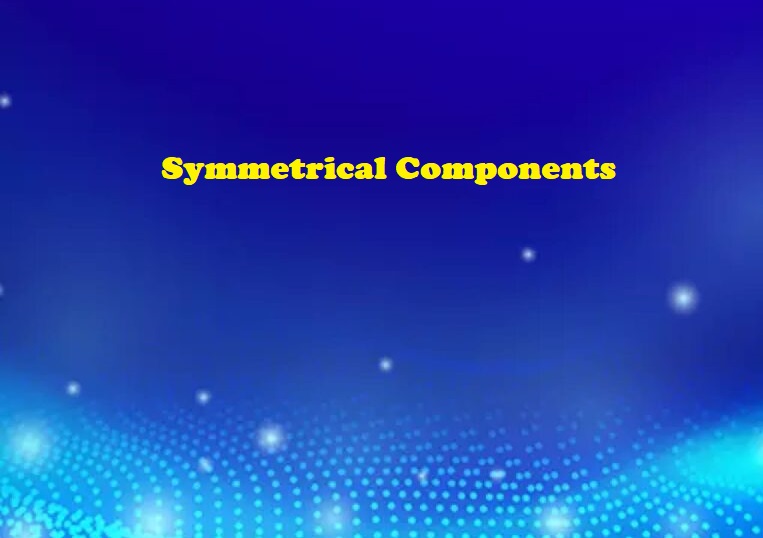 The symmetrical component is a methodology that is applied to the Solution of Polyphase Networks.

there are three sets of independent components in a three-phase system: positive, negative, and 0. zero is for both current and voltage. Positive sequence voltages (Fig. 1) are supplied by generators within the system and are always present. The second set of balanced phasors are also equal in magnitude and displaced 120 degrees apart, but display a counter-clockwise rotation sequence of A-C-B (Fig. 2),  which represents a negative sequence. The final set of balanced phasors is equal in magnitude and phase to each other, however, since there is no rotation sequence (Fig. 3) this is known as a zero sequence.

The symmetrical components can be used to define any unbalanced current or voltage (Ia, Ib, Ic or Va, Vb, Vc which reference unbalanced line-to-neutral phasors) like:

The sequence currents or voltages from a three-phase unbalanced set can be calculated by using this equations:

The Independent symmetrical components and their resultant summation follow the superposition rules, which are the base of its practical usage in protective relaying. Before this procedure, we need a mathematical explanation of the “a” operator. With Fortescue’s formulas, the “a” operator shifts a vector by an angle of 120 degrees counter-clockwise, and the “a2” operator performs 240 degrees counter-clockwise phase shift. A balanced system will have only positive (Figure 4). the calculation of symmetrical components in a three-phase balanced or symmetrical system results in only positive sequence voltages, 3V1.

likewise, the currents also have equal magnitudes and phase angles of 120 degrees apart, which would produce a result of only positive sequence and no negative or zero sequence currents for a balanced system.